What is Climate? Does it matter?

These are some definitions of climate I have gathered:

Weather conditions prevailing in an area in general or over a long period.
"our cold, wet climate" ·

A region with particular prevailing weather conditions.
"vacationing in a warm climate"
Climate is the statistical average of prevailing meteorological conditions. It is always regional and applies over a given period of time. The most common climate variables are temperature, precipitation and wind pressure. On Earth, the climate depends on a region’s latitude, altitude, topography, vegetation and proximity to the oceans. Extraterrestrial forces that influence climate include the orbit of the Earth and planets around the Sun, and variations in the Sun’s intensity.

Climate:  definition, the composite or generally prevailing weather conditions of a region, as temperature, air pressure, humidity, precipitation, sunshine, cloudiness, and winds, throughout the year, averaged over a series of years.

Climate is the statistics of weather over long periods of time. It is measured by assessing the patterns of variation in temperature, humidity, atmospheric pressure, wind, precipitation, atmospheric particle count and other meteorological variables in a given region over long periods of time. Climate differs from weather, in that weather only describes the short-term conditions of these variables in a given region.

***********
So what is climate? Is it a statistical value? The "average" weather as observed but not calculated? Whether there are four distinct seasons or less than four? Is it whether the weather is always warm, always dry, always wet? Perhaps a weighted average of each?
There really isn't a "true" definition of climate. For climate science, most often it's the average temperature (and maybe precipitation, etc) for an area over 30 years time. That's what the Global Average Temperature is based on. However, a calculated statistic is not reality in any way. The "average" height of humans is meaningless since there are always those taller and those shorter. Giving an average is just giving a number.

What then does climate change mean? I don't know that there is a real definition thereof. There's a rise in the calculated global average temperature that was attributed to global warming. Then, it became obvious that "global" warming really wasn't global at all. Now, while the Little Ice Age and Medieval Warm Period may not have been 100% global, current changes in climate are in NO way global. The Arctic appears to warm faster while much of the Norther Hemisphere is freezing--indicating there really is only LOCAL climate, not global.

Going back to "what is climate"? The most reliable answer would be the number of seasons a place has, yet even that is in no way constant. When I first moved to Wyoming, there was virtually no fall. I was so excited the first years the leaves turned colors. There wasn't much for spring, either. Mostly just summer and winter with a very brief divide between the two. Now, we have fall colors fairly regularly. I varies from year to year. Sometimes there's just winter and summer basically. Seasons, therefore, are not even a 100% way of defining climate.

Climate--it looks more and more like a magical term used for whatever purpose one wants. The reality is the only thing that really matters to humans is weather. Let's go with the idea for the moment that weather is what climate really means (since "extreme weather" is now used as evidence for "climate change"). So what is global warming and man made climate change? Global warming refers to the property of CO2 (and H2O also) that absorbs long wave radiation (radiation the earth reflects back to space. Incoming radiation is short wave radiation) and then reradiates the energy in all directions. The energy that is directed toward the earth and some of the other energy as well is sent back to earth, adding heat to the planet. Water actually does the same thing. Humans burning fossil fuels and changing landscapes are believed by some to have increased the global temperature.

Now we are back to what is a "global temperature"? As with climate, it's a mathematical construct. IF the global average temperature rises, what does that mean? Many say "climate change" but climate change really isn't relevant, only local conditions. There is no "global climate". Nothing in the man made climate change theory can in any way predict local weather changes. Nothing. So why then are people saying we have 12 years left to fix this "problem", school kids striking (I realize that may be to get a day off from class...), and so forth? Politics is why. Politicians often use propaganda and incorrect or exaggerated claims to frighten people, to keep themselves in power.
(see http://climate4kids.blogspot.com/2014/04/dont-be-afraid.html)
There is no science behind the scary predictions. We simply DO NOT KNOW what is coming. There are no scientific psychics out there (nor any other kind, for that matter). Plus, again, the theory does not address local weather but rather makes broad, meaningless, useless claims about more extreme weather.
The weather--what we live in--changes always and will no matter what we do or don't do. Contrary to what the scare mongers say, the weather is not getting worse. Yes, it's flooding across parts of the US but it flooded longer and a much larger area in 1993. There have been tornadoes but there have always been tornadoes, more in some years, fewer in others. There's no clear trend in numbers or severity. The "permanent drought" in California is now officially over. Snow has returned to the Northern Hemisphere in large amounts, as has colder weather. Glaciers are growing in some areas, decreasing in others, as has always been. 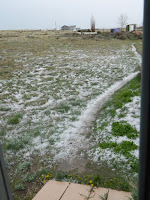 Some examples of what might be called "extreme weather".  In the real world, these are common.  Extremely annoying, problematic at times, dangerous, but the events are what has always happened on Earth.  Nothing has really changed except our reactions.

We have snow, hail, high wind and a thunderstorms pictured here.

It's important to note that the media regularly exaggerate these events.  Four inches of snow in the past did not call for a "winter storm warning".  A blizzard warning involved many, many inches of snow and high wind.  High wind warnings seem to vary depending on the area—people in urban areas consider 30 mph high wind much of the time.  All definitions of these terms are subjective and can be ramped up or down at will by the media, scientists, etc.  The weather people do have standard definitions, but again, these can be modified to increase people's belief in the weather being more severe. 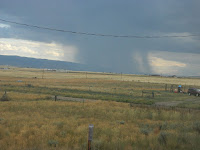 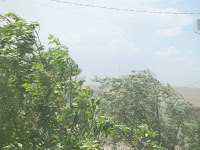 Back to climate and what it is. Other than to say it's a mathematical construct, it's really not definable in any meaningful way or perhaps it's defined in too many ways to be useful. So what is "climate change"? Again, nothing that is definable or useful. It comes down to weather and weather is always changing. There is no crisis. Later on, we will look at the weather in local areas to see how that is changing, which is really all that matters. I think you'll be surprised at how little things do change over time in the weather.


Time to realize "climate change" really is nothing to fear.  We live in weather, not climate, and weather always changes.  We adapt.

(Feel free to comment on this article.  I am interested in people's reactions to this idea.  All comments are modified.  I will address them as quickly as possible.)